Is Nicotine Gum Bad For You? 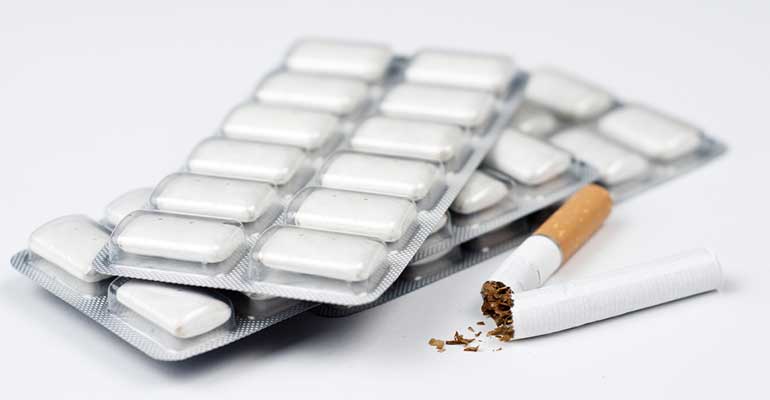 Smoking is bad for the health, and there is no way around such a fact. Smoking harms almost every organ of one’s body. Almost 87% of people die from lung cancer caused by smoking cigarettes. Smoking also causes other health issues such as cancer, lung diseases, heart diseases, blood vessel problems, strokes, and cataracts as well.

Women who are pregnant and smoke have chances of developing pregnancy complications, or there is also a risk that the baby might die due to sudden infant death syndrome (SIDS). So, your habit is not only injurious to your health but is also harmful to the people around you as well.

Passive smokers inhale secondhand smoke and they then also have to experience the same health problems as smokers do. Cigarettes contain many toxic substances; one of its main ingredients happens to be nicotine.

One method of helping people get rid of their smoking habit is nicotine gum. Let’s take a closer look answer questions such as is nicotine gum bad for you and what it actually does.

A brief introduction to nicotine gums

Nicotine is found in tobacco plants and is an addictive substance used as an active ingredient in cigarettes, cigars, and chewing tobacco. This drug is also found in smoking-cessation products such as chewing gum and wearable patches.

Chewing gum can be a fun pastime as well as a distraction for many people. Many people tend to chew gum when they are trying to quit smoking as it provides them oral gratification similar to their smoking habit.

Health experts came up with the idea of combining these two in order to come up with a replacement for smoking. And so in the 1970s, a chewing gum that contained nicotine was introduced and it was offered as a prescription method to assist people in quitting their habit.

Nicotine chewing gums help people when it comes to quitting smoking, which can be quite a difficult task. While taking these gums, you should also follow smoking cessation programs that include support groups counseling, behavioral changing techniques.

What is nicotine gum?

These nicotine gums were the first pharmaceutical option introduced in the late 1970’s to help people quit smoking. They were initially introduced in the market as a class of medications called smoking cessation aids and were then known as Nicorette.

To buy them, you needed a written prescription. However later they were made widely available to the public and you could buy them over the counter without any prescription.

What does this Nicorette gum do?

What the nicotine gum does is that it provides nicotine to one’s body and replaces the nicotine that smokers get from tobacco products. This way nicotine gum users can gradually reduce their nicotine dosage and can decrease the withdrawal symptoms that one usually experiences.

Such gums act as substitute oral activity that helps in reducing one’s urges to smoke. Nicorette gum is a hard gum that is packaged in individual foil containers. The gum contains either 2 mg or 4 mg of nicotine in each piece. This is approximately equal to the amount of nicotine present in 1 to 2 cigarettes.

If you’re a smoker who needs a cigarette within the 30 minutes you wake up; then you should opt for the 4 mg dose gum. Meanwhile, smokers who can wait for more than 30 minutes after they’ve woken up should take the 2 mg dose gum instead.

How to take these chewing gums?

You’ll have to chew the gum for at least 15 minutes after you’ve eaten or drunk something. Chew the gum until you feel it softening, by that time you’ll taste a peppery taste and feel a tingling sensation. When this happens, place it between your cheek and your gums, and leave it there. When you notice that the gum has started to lose the tingling sensation, start chewing again until it returns.

You can repeat the cycle for up to 30 minutes as many times as necessary. This allows the body to absorb the nicotine into the bloodstream after you’ve held it against your cheek. Through each piece of chewing gum, a slightly less than a full amount of nicotine gets absorbed into the bloodstream.

You can use one gum in one hour which makes it a total of 24 pieces of gum throughout the day. However, you should reduce the dosage by having intervals between each piece you chew, gradually increase the number of hours between each piece over the week.

Is nicotine gum bad for you?

The idea of chewing a nicotine gum may sound fun and intriguing. However, you must understand that this gum is still a medication that was once available only if you had a written prescription. This is why it can have many potential adverse effects on your health. These side effects cannot be eliminated; however, you can minimize them by using this medication carefully.

Chewing these fast or having one piece immediately after the other one, also called chain chewing, can increase the risk of side effects. Now, if you were to avoid these actions, you can reduce the chances of experiencing many side effects.

Nicotine gum is not considered to be safe for more than 12 weeks of use. Some common side effects that one experiences include:

Since nicotine gums are medications, they can have severe side effects as well. The most serious side risks from using these gums include an accidental overdose and nicotine poisoning. This usually happens when people continue to smoke while taking these medications, in some cases, people end up doubling the dose.

Nicotine replacement products such as these are intended to be used alone as they provide an alternative to nicotine addiction. Symptoms of nicotine poisoning or overdose include respiratory issues, seizures, and can even lead to death. With nicotine poisoning, children are also at risk since they might confuse them with normal chewing gums as these are similar to other non-toxic forms of gums.

Using these gums according to the directions written on the package can also cause health risks. Using these gums for a longer period can cause the muscles in one's throat to get weak and can lead to chronic hiccups. Your throat feels irritated and as if it is closing. Nicotine consumed in any form can lead to heart diseases, gastroesophageal reflux disease, stroke, and mouth and esophageal cancers.

If you're planning on getting pregnant or are already pregnant, then you should not use these gums as they can cause congenital disabilities. There is an increased risk of adverse side effects and disabilities if you use these gums within the first three months while you're pregnant. Instead, consult your doctor and discuss a safer alternative that would be as dangerous to your health as these gums.

Nicotine gum is a great alternative; you can get the nicotine from them without having to deal with the other terrible things present in cigarettes. However, you need to use these gums carefully to avoid severe side effects. You need to use a less dosage of these gums, and as long as you aren’t using them for a prolonged period, all should be good.

Where to get them from?

This pharmacy has discounted rates for both prescription drugs as well as over the counter medications including painkillers, allergy medications; we also sell pet medications, too.

With us you can find both nicotine gum 2 mg as well as nicotine gum 4 mg. You can choose the ones you are prescribed or need, and can then place an order. Both 2 mg and 4 mg of this medication contain the right amount of nicotine needed; hence, making them the ideal option for nicotine replacement therapy since people, when quitting smoking, experience withdrawal symptoms due to lack of nicotine in their body.

These symptoms include irritability and mood swings, restlessness, trouble in concentrating, increased appetite, etc. Nicorette gum helps by reducing these symptoms; it provides a reasonable amount of nicotine.

With these gums, the dose is gradually reduced, and finally, the person no longer craves nicotine. The 2 mg nicotine gum is suggested to women who are pregnant or lactating and plan to quit smoking. However, make sure to first consult your doctor before taking one.

You can also opt for nicotine lozenges from Canada Pharmacy if you prefer.